This site is privately owned and is not affiliated with any government agency. Learn more here.

Learn How To Apply For CHIP With Our Guide 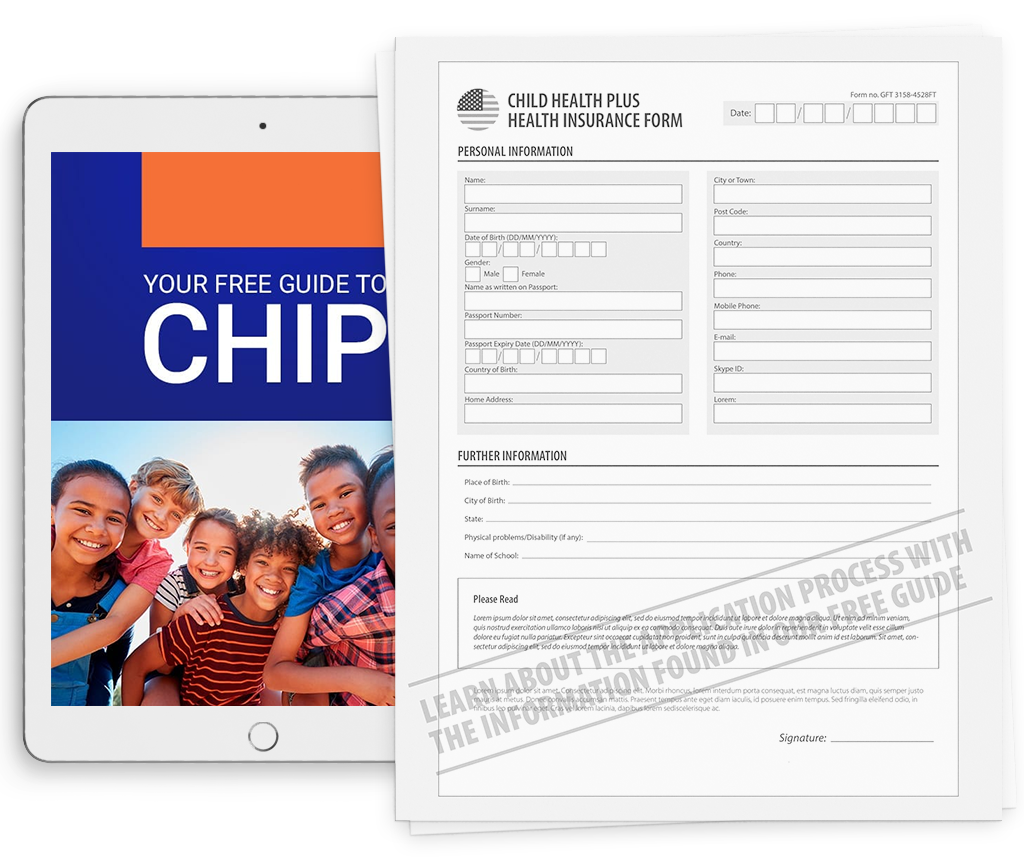 We Provide a Free Guide

Our FREE guide provides helpful information about how to apply for benefits. Learn more about us here.

CHIP gives insurance to children of families that earn too much to qualify for Medicaid, but not enough to get private insurance. The Children’s Health Insurance Program works just like any other insurance plan, with co-pays and out-of-pocket costs, except that because CHIP is state-run, the costs and benefits change depending on the state.

Some states also offer other benefits for the residents. For example, CHIP Texas offers a 24-hour nurse helpline, home visits for children with asthma and diabetes and take children to the doctor. And CHIP Utah offers case management for special needs and mental health services.

CHIP benefits are different in every state, but there is an established minimum that the states are required to cover, and any additional coverage is enacted at the state’s discretion. The basic health coverage that all CHIP programs must give are:

There are some services given by CHIP, such as routine check-ups, at no cost to beneficiaries. The amount charged for other services is determined by the state. Whether or not there will be premium fees for enrolling in CHIP is also left to the discretion of the states, but federal guidelines establish that a family cannot be charged any more than 5 percent of their annual income. The premium is also a flat amount, no matter how many children in the family are enrolled in CHIP.

CHIP coverage is only available for children and teens. Parents are cannot get healthcare services through CHIP, but may still be qualified for health benefits through the Health Insurance Marketplace. Additionally, CHIP does not consider pre-existing conditions when determining which benefits to offer to a child. There are also no pre-existing condition waiting lists or additional fees.

Chip qualifications require that a family have a child who is younger than 19 years old, and the family income must be too high to qualify for Medicaid. However, a new eligibility group was added in 2010 under the Affordable Care Act. Children of public employees can now submit a CHIP Medicaid application as long as the family income falls within the eligibility income range. Further, children covered by CHIP must be legal residents or citizens who are currently covered by health insurance.

Each state has its own CHIP income guidelines. Forty-six states and the District of Columbia currently cover families up to 200 percent of the federal poverty guidelines, and 24 of those states cover families up to 250 percent of the poverty limit. The guidelines for federal poverty level and family size within the common CHIP income limits are as follows (please note that a family of 1 could mean a child that does not live with a parent or other relative):

Prenatal, delivery and post-partum care are available to low-income pregnant women through the CHIPRA act, or Children’s Health Insurance Reauthorization Act. However, CHIPRA is federal permission for the states to expand CHIP to expecting women, not a demand that states open eligibility. The states that include pregnant women in the CHIP eligibility requirements are:

It is important to note that if your children qualify for CHIP, they are not eligible for savings on the Health Marketplace. However, CHIP coverage is often more affordable than a plan purchased on the Marketplace.

Learn About the CHIP Application

CHIP enrollment is managed by each state. There is no enrollment period that restricts when you are able to submit a CHIP or Medicaid form, and most states allow applications online or through the mail. In fact, if you apply to Medicaid coverage, you would be informed if your children are eligible for CHIP coverage. There is one application for both CHIP and Medicaid.

When applying for CHIP, the most direct way is to locate the CHIP agency in your state and download the state CHIP enrollment form. However, on a national level, you may also:

To skip the middleman, go straight to the state. A CHIP online application is available from most states, and a state-specific toll-free number and a paper form are available on site. Applications can be downloaded, printed and then mailed to the office.

Once you have submitted your application to the state office, you should receive a response in approximately 45 days. Documentation to prove the identity of all family members and proof of the family income will be required before your family can be cleared for benefits.

If you are approved for a CHIP plan, you are required to select a primary care doctor for all children who are covered. A doctor must be selected from the state network of hospitals, clinics and physicians who accept the state CHIP. For example, the Texas CHIP program includes roughly 700 doctors and 40 hospitals in 20 counties.

Find out About CHIP Waiting Lists

As of November 2016, only 15 states have waiting lists for CHIP insurance for kids. Due to a federal law passed in 2014, the waiting period cannot legally exceed 90 days. The same law also required that states adopt exemptions to their waiting periods and institute benefits preferences for families in need, but the terms of the exemptions were left to the discretion of the states.

Additionally, children who previously had coverage under the Consolidated Omnibus Budget Reconciliation Act (COBRA) health benefits provision are also usually exempted. COBRA is a health service that requires employers to continue to give healthcare to group plans when coverage would otherwise be ended. For example, a parent who loses employment due to company lay-offs may be able to continue coverage by COBRA. However, COBRA is a temporary benefit and may lapse before the family parent or guardian has acquired new health coverage. In this case, many states exempt children who were previously covered by COBRA from the CHIP waiting list.

Learn How To Apply For CHIP With Our Guide

Want to learn about who we are? Please visit our About Us. You will receive your free guide as soon as you provide your email address. You are not required to participate in our survey, answer questions and no purchase is needed in order to get your free guide. We aren’t owned, operated or endorsed by any government agency.